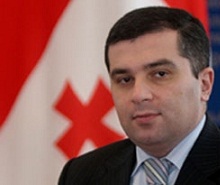 "It's important for us that Georgia has complete information about the flow of goods," says speaker of parliament Davit Bakradze. Switzerland will oversee a new border control regime between Russia and Georgia.

TBILISI, DFWatch – The Georgian Speaker of Parliament Davit Bakradze hopes that Switzerland will be able to fully monitor the flow of goods across the border between Georgia and Russia.

Bakradze said this at a meeting with the delegation of the Swiss Foreign Affairs Department.

Russia occupied parts of Georgia’s territories after the war in August 2008. Georgia has been striving for a control regime for the flow of goods across these border. After Swiss-hosted negotiations last year about Russia’s WTO accession, an agreement was made that Georgia would accept Russia as a member of the Word Trade Organizations in return for a new control regime on the border to be run by a private company overseen by Swiss authorities.

Bakradze says the Swiss side played an important role in the negotiations about WTO and now it is important for Georgia that the achieved agreement will be fully implemented.

“Switzerland has a crucial importance and function in the issue of monitoring of goods and it is important for us that goods be fully monitored on the Georgia-Russia border; also that Georgia has complete information about the flow of goods, something which is envisaged by the agreement,” the Speaker of Parliament added.

In addition, by his rates, the Swiss participation has great importance in the Geneva negotiations, which is currently the only channel through which the warring parties of 2008 are meeting eachother for negotiations. Georgia broke off diplomatic relations after the war.

Davit Bakradze said at the meeting they have discussed the negotiations between the two countries, including refugees and village support program, which is implemented with the aid of Swiss funding.