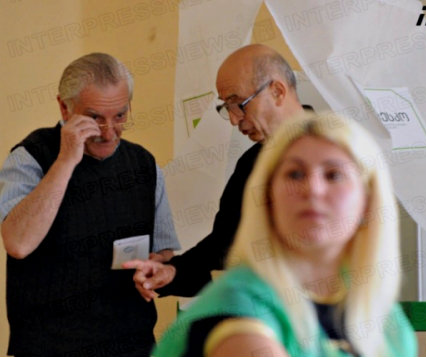 Georgians go to the polls for run-off elections in eight cities and 13 municipalities today. (Interpressnews.)

TBILISI, DFWatch–Today, Georgia holds the second round of the local election in eight cities and 13 municipalities.

According to the Central Election Commission (CEC), there are 1,715,514 voters for the second round, who will vote in 28 electoral districts comprising a total of 1,525 precincts.

Media outlets and non-governmental organizations which were accredited for the first round of election will also be able to monitor the second round.

Most attention will be focused on the mayoral race in Tbilisi, where the governing Georgian Dream coalition competes against the National Movement, the former ruling party.

Also Rustavi, Telavi and Batumi there are run-off elections for mayor. Georgian Dream competes against the Green Party in Mtskheta, against the Georgian Party in Gori, and against the Alliance of Patriots in Poti and Ozurgeti.

In the country as a whole, the government coalition received 50.82 percent, while the National Movement got 22.42 percent.