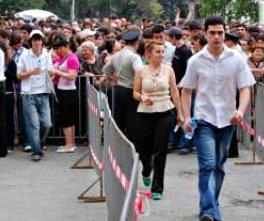 National exams began all over Georgia on Thursday.

Today there is a test in Georgian grammar and literature. There are 19 exam centers in Georgia, seven of them in Tbilisi, three in the second largest city Kutaisi, and the rest of the centers are in population centers around the country: Poti, Batumi, Zugdidi, Ozurgeti, Akhaltsikhe, Gori, Tbilisi and Khulo.

According to Maia Miminoshvili, Head of the Exam Center, Georgian literature and grammar test will last two days. There will be no exams during the weekend, but from Monday there will be an ability test with a logic part and a math part, followed by foreign language tests in English, Russian, German and French, which students may choose between. There will be tests in geography, history, mathematics, chemistry, biology, physics and fine arts, which is a new optional subject to pass for school graduates from 2014.

About 4,000 youth will not be able to become student because there are not enough vacant places.

Economic and Social and Political studies are the most desirable faculties at the universities.