Georgia held its own Olympic oath ceremony in Tbilisi

Georgia held its own Olympic oath ceremony in Tbilisi 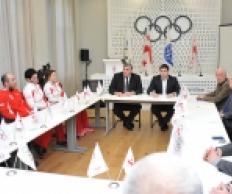 TBILISI, DFWatch–As Georgian athletes are making their way to the Russian city Sochi to take part in the Winter Olympics, they have just held their own oath ceremony in Tbilisi.

On Monday, alpine skier Nino Tsiklauri held one corner of the Olympic flag as she read out the athlete’s oath in a ceremony held at the office of the Georgian National Olympic Committee in Tbilisi. She will be flag bearer for the Georgian team.

The official Olympic Oath will be taken in Sochi on February 7. It has been a regular part of the opening ceremony since 1920 and is taken by one athlete from the host country – this year Russia – on behalf of all participating athletes from all countries.

The first group is leaving today Tuesday. Most of the delegation will leave on February 6, while Gedevanishvili will join them a bit later.

In the delegation are Emzar Zenaishvili, Secretary General of the National Olympic Committee, and Vice President Mamuka Khabareli.

The Georgian delegation will take a direct flight to Sochi. Flights from Tbilisi to Sochi will start from Tuesday.

Georgia’s Foreign Affairs Ministry said in a statement aimed at Georgians wishing to attend the Olympics, that the vice consul of the Swiss embassy has gone to Sochi and will be on duty from February 7 to February 23 to help Georgian citizens. There will be a hot line for Georgians at the Swiss House inside Sochi Olympic park.

Despite criticism from the National Movement and other groups, the government did not change its mind about participating in the Olympics.

Abashidze said on Monday that participating in the Sochi Olympics might be a contribution to improving the country’s security problems. He said he understands there are a variety of opinions about Georgian athletes participating in the Olympics, but he added that Georgia as a country cannot boycott the Olympic games, and western partners support Georgia’s decision to participate.

Abashidze said this Olympics might be one of the most difficult games a Georgian team has ever participated in.