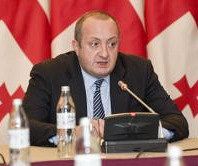 TBILISI, DFWatch–The Georgian president’s annual address will be held either on February 19 or February 21, the speaker of parliament says.

According to the Constitution of Georgia, the president must once a year visit parliament to present a report about important processes in the country. The address must take place at the beginning of parliament’s spring session, which started on Tuesday.

It was expected that President Giorgi Margvelashvili would visit parliament this week, but Speaker of Parliament Davit Usupashvili said at Tuesday’s session that the president will deliver the address to parliament in the next session week.