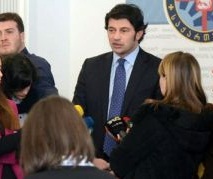 TBILISI, DFWatch–The Energy Ministry in Georgia says the government is taking into account the requests of villagers in Khaishi and has halted surveying work in their village.

The construction of the massive Khudoni hydropower station in northern Georgia will cause flooding of the village Khaishi, as well as several other settlements in the Svaneti region, which is one of the areas of the country with the most distinct traditional cultural landscape.

A few days ago, the government proposed to start surveying work on the lands that villagers will have to give up, and offered to let them register these lands for free. But the villagers said no and blocked a road to prevent workers from starting the land surveying work.

On Tuesday, Energy Minister Kakhi Kaladze said that the surveying work has been halted. He said he was informed about the villagers’ demands and decided to do what they wanted.

He said they asked to temporarily stop the surveying work.

“We are ready for that. I am also ready to go there and meet with locals and to explain the positive sides of this project to them in details,” Kaladze said, but didn’t specify when when he plans to visit Khaishi.

Villagers want to organize a gathering people from all of Svaneti and discuss this issue together with them.

At first, they planned to hold the gathering on February 6, but it has been postponed indefinitely.