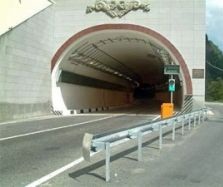 The Roki tunnel, one of the roads through Caucasus that is virtually not operational due to the political situation. (Interpressnews.)

TBILISI, DFWatch–Georgia views with caution the construction by Russia of yet another trans-Caucasus road, while the opposition sees a direct threat for a country whose territory’s 18 percent is occupied by its northern neighbor.

In North Caucasus, authorities in Dagestan eyes huge income into the budget of this debt-ridden republic which is part of the Russian Federation. The Dagestanis hope the Avaro-Kakheti route will compete with and even overtake the only current passage that connects Russia’s Northern Caucasus to Georgia, the so-called ‘Georgian Military Road’ (GMR).

There is virtually no connection via two other alternative roads, along the Black Sea shore and via Roki tunnel, in breakaway Abkhazia and South Ossetia respectively.

However, Georgia sees this project through the prism of Russian aggression, especially those in opposition, and the government denies that there are any plans to build the road on the Georgian side of the route.

The government is skeptical to the project. A spokesperson for the Ministry of Regional Development and Infrastructure told DFWatch that the ministry has not had any consultations about it neither with Dagestan nor Russia. Therefore, the ministry states, Georgia doesn’t plan any construction work on the Georgian side of the former Avaro-Kakheti Road.

Georgian officials call this project an internal Russian affair and distances itself from it.

At the same time, the National Movement, which ruled Georgia almost unimpeded for a decade but is now out of power, is staunchly opposed to the project as it views it as way for Russia to increase its military threat against Georgia.

The road was built in the 19th century by the Russian Empire through the Dagestani mountains for military use to strengthen its foothold in South Caucasus and further into the Middle East and Central Asia, in order to deter its long-standing foes, the Ottomans and, probably, the ambitions of Western powers, particularly Britain.

Later it was used by the Soviet Union, but to a lesser degree than the GMR or the Roki route.

After the break-up of the Soviet Union, the checkpoint was installed by both Georgia and Russia, but after the situation deteriorated during the Second Chechen War, the border checkpoint ceased to operate, and still doesn’t operate. Today only the remnants of the road exist. The Georgian section of it is not passable by any kind of vehicles. On the Dagestani side, the road is in good shape in some areas because it is used for domestic transportation.

Overall construction of the Russian part of the route will require laying down 83 km of road, building 25 bridges and five tunnels. The preliminary budget of the project is no less than 30 billion rubles, or 740,000 million USD.

Some skeptics in Russia also question the project and see it as a tool to divert state fund by officials in Dagestan, the most corrupt republic in Russia.

But the most significant threat is related to security. After Ramzan Kadyrov, the head of the Chechen Republic, tightened his grip on this rebel republic, the brunt of the North Caucasus jihad movement was shifted toward Dagestan. Now the security situation in Dagestan is by far more dangerous and complicated than in Chechnya, where Ramzan Kadyrov has been waging his war against the Caucasus Emirate, a jihadist umbrella organization encompassing tens of groups of Chechen, Ingush, Dagestani, and other Islamist radicals. Using unmatched brutality and a vigilante-style tactics, Kadyrov and his guard, the so-called Kadyrovtsy, managed to enhance the security level in the republic. Now most jihadist groups operate in Dagestan, instead of Chechnya.

According to the Russian pro-Kremlin online news magazine kavpolit.com, Ramzan Kadyrov has also been lobbying the construction of a different trans-Caucasian road to Georgia via Chechnya.