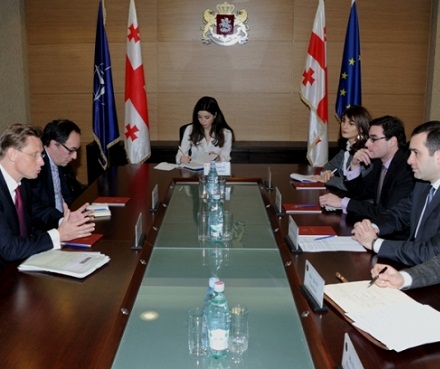 TBILISI, DFWatch — Georgian troops serving in Afghanistan will not carry out battle functions after 2014, when the ISAF mission will end, but they will help Afghan security structures and army in military training.

Irakli Alasania, Georgia’s Defense Minister, on Tuesday met with Ten Brook, Chairman of the Defense Committee of the Dutch Parliament, to talk about the future of the ISAF mission.

“Our strategy will be based on the mentioned process, how Georgia will assist Afghan National Security Forces with training. I’d like to underline that our mission won’t be a military and combat one,” he said. “Our task will be to share experience with the ANSF.”

The minister said after the meeting that Georgia also would offer the Afghan side to educate their soldiers at the Georgian National Defense Academy.

Alasania says Georgia is participating in the planning process along with NATO on what form the mission will have in the future and how each country will participate in it.

“I am quite impressed with the results so far achieved at the Defense Ministry,” Ten Brook said after meeting. “It’s extremely important for the international community to know what Georgia is doing in this respect.”

Brook will also meet with the Chairman of the Georgian Parliament and Minister of Foreign Affairs, as well as other representatives of the legislative and executive bodies. He will also visit the de facto border with the breakaway region and wrap up his visit to Georgia on January 10.

Georgia is one of the largest non-member contributors to ISAF mission. More than 1 700 soldiers participate in the mission today. Nineteen Georgian soldiers have lost their lives in Afghanistan.