Georgia doesn’t expect a NATO membership plan this time around

Georgia doesn’t expect a NATO membership plan this time around 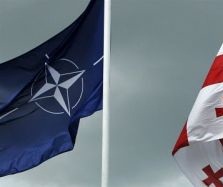 TBILISI, DFWatch–Tbilisi considers it unlikely that NATO will offer Georgia a Membership Action Plan (MAP) at the Warsaw summit, which begins today, after a number of officials from member countries made it clear that it is not on the agenda.

Georgian authorities believe that there will still be a beneficial outcome as NATO will propose new ways to improve the country’s defense ability.

Defense Minister Tina Khidasheli said before departing that the most important thing is that Georgia can return from the summit with more opportunities, more instruments to defend itself by air, sea or land.

PM Giorgi Kvirikashvili said that Georgia expects further confirmation of the declaration at the 2008 Bucharest summit that Georgia will join NATO as a member some time in the future. He also commended the progress the country has achieved in regard to military reforms and complying with NATO standards.

The Georgian delegation departed for Warsaw on Thursday and is chaired by President Giorgi Margvelashvili.

Georgia bottled a special wine carrying the logo of the Warsaw summit and the other guests will have an opportunity to taste the wine on July 8-9.

Bottles of the special wine bottles will be given to foreign ministers of the NATO member states, who participate in NATO-Georgia commission session, according to the Georgian foreign ministry.