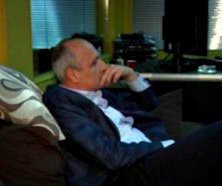 He is charged with sabotaging the investigation of the murder of a bank employee, Sandro Girgvliani, in 2006, appropriation and embezzlement in connection with an employment program in 2012 and the violent dispersal of demonstrators on May 26, 2011.

This is the second time Merabishvili and Chiaberashvili are being questioned by police regarding the employment program. The first time they were questioned was February 13, 2013.

In December, 2012, Merabishvili was questioned on suspicion on having tried to board a flight with a forged passport. With the charges he was served today, he may face from 7 to 18 years in jail.

He is considered one of the most significant figures within President Saakashvili’s National Movement party, and is credited with having rooted out low-level corruption. The current UNM secretary general was until today thought to be one of that party’s candidates for president in the October election.

Merabishvili is being questioning at the regional Prosecutor’s Office of the Imereti region, in Kutaisi in western Georgia.

He told journalists before entering the office that it would have been better if the government had focused on fulfilling its employment program in parallel with his questioning.

Members of the UNM and other supporters are gathered at the proseecutor’s office to support him.

Chiaberashvili said before the questioning started that ‘due to the absurd steps of the new government’ he doesn’t exclude that he and Merabishvili may be charged and detained.

In the summer of 2012 when Vano Merabishvili was leading the National Movement party’s election campaign as prime minister, Saakashvili’s government announced a new program to register unemployed people and create a database to help them in getting job.

The government announced that 3 000 people would be hired to register all the unemployed.

According to the Prosecutor’s Office, the government hired an additional 21 837 persons for this process and allocated 5.24 million lari for their salaries. They did not get any type of training or instructions for their future job.

According to testimonies of about 2 000 people out of those 21 837, they didn’t carry out any job when they were taking part in the program, but were paid for various activities during the UNM’s election campaign.

The Prosecutor’s Office issued a statement saying it has carried out complex measures to investigate the actions of Merabishvili in different positions in the previous government.

The first episode is about the election campaign of the UNM in 2012, when according to the statement, Ivanishvili implemented a secret operation to bribe voters and used the employment program as a cover.

5.2 million lari was illegally transferred to 22 000 people for election campaigning instead of implementing certain activities within the frames of the employment program.

The investigation is almost finished regarding the May 26, 2011 events, when police violently dispersed a peaceful anti-government rally.

“On personal order of Vano Merabishvili and his personal control, police used exceeded and disproportionate power against fenced-in citizens, as result two citizens died and many people were injured,” the statement reads.

The third case is the controversial case of the murder of Sandro Girgvliani. The Prosecutor’s Office writes that the investigation almost restored the precise situation and condition of the incident, defined participant persons and revealed the real motive of crime, its organizers and executors.

“Evidence unequivocally prove that Vano Merabishvili together with other high officials, also his wife Tako Salakaia and close persons, wanted to distance themselves from the crime and provided falsification of material in the investigation of the case and purposefully interrupted the restoration of justice in the case.”