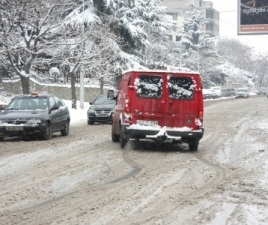 Snow storms in winter and flooding in summer have knocked out infrastructure in Georgia. (Interpressnews.)

The first one is a temporary center for crisis management to deal with the problems caused by bad weather and earthquakes.

The second state body is a center to solve problems related with the citrus season.

The Adjara region in south west Georgia has been dealing with electricity blackouts for almost a week due to bad weather. There are also restrictions on road traffic due to frost and snow in Georgia.

This comes after many serious weather incidents in the last few years, which have caused loss of life and major material damage.

Members of the citrus crisis center on Monday visited the Adjara region to learn more about the problems citrus farmers are experiencing there. So far, the minister says, 23 000 tons of citrus fruit has been exported. But for the last five days, bad weather has created problems as ships were unable to enter the port.

Some of the farmers have problems transporting their harvest to the citrus companies.

Another crisis management center was set up on Sunday during a special session held by the prime minister attended by the energy minister, the infrastructure minister and his first deputy, interior minister, defense minister and chairman of the government’s department of relations with regions and local governments.

Minister of Infrastructure Davit Narmania said the main goal of the new crisis management centers will be to have more coordination between government bodies in emergency situations like flooding, snow and earthquake. He said all the major ministries which have to deal with natural disasters and with paying compensation to people affected will be involved.

Finance Minister Nodar Khaduri said there will be no additional financing for these centers.

“Unfortunately, many natural disasters happen every year, almost every other week,” he said. “There are problems which need to be solved immediately and that’s why this body was created.”