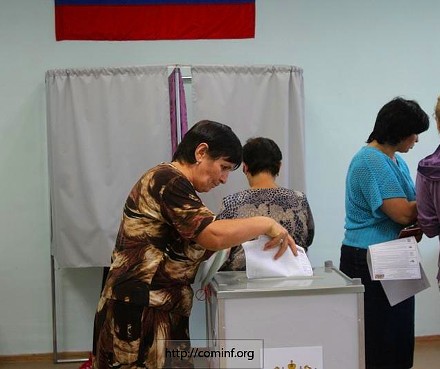 Voting for Russia’s State Duma in Tskhinvali on Sunday. (RES.)

TBILISI, DFWatch–Georgia condemned the election Sunday for the Russian State Duma inside the two breakaway regions Abkhazia and South Ossetia.

Georgia’s Ministry of Foreign Affairs (MFA) called on the international community to react against this violation of Georgia’s sovereignty and territorial integrity.

Russia considers Abkhazia and South Ossetia separate countries and has propped them up since the 2008 war, although most of the world sees them as parts of Georgia. Both regions broke loose during the final months of the Soviet Union but have remained as unsolved territorial disputes on Russia’s periphery.

The total number of voters in Russia is estimated at about 112 million, according to the country’s central election commission. 95,836 polling stations were open on election day. 371 of those polling stations were outside of Russia, servicing the nearly two million Russians abroad, most of whom live in Europe. In Latvia, 14,000 Russians voted at six precincts.

According to Georgia’s MFA, 21 precincts were also put up inside the two breakaway territories Abkhazia and South Ossetia, where many people have a Russian passport after years of what Tbilisi calls forced passportization, a part of what it considers a creeping annexation.

Over 114,000 people in the two areas were registered to vote in the Russian election, Georgia’s Ministry of Foreign Affairs wrote in a statement.

“As early as the 2000s, Moscow started the process of illegal, forced passportization in Abkhazia and Tskhinvali Regions, and in 2011-2012 made these people illegitimately participate in the parliamentary and presidential elections of the Russian Federation. Furthermore, in 2016 they are included in the electoral lists of Russia’s federal districts and voting for a majoritarian candidate from the respective federal subjects,” Georgia’s MFA wrote.

The Duma election also drew condemnation from Kiev which regarded the election in Crimea as a step toward absorbing the region which was annexed by Russia in 2014. In Kiev, right-wing protesters blocked voters from entering the Russian embassy. There were no polling stations in the militant-held areas of southeast Ukraine.

225 new members of the State Duma are to be selected through the proportionate system and another 225 Duma members through single-mandate constituencies.

There are 14 political parties running, while also 23 independent candidates for single-mandate districts.

In addition, all the 85 Russian regions also held local elections for different levels including local legislatures.

According to an exit poll, ruling United Russia will get 44 % of the votes.