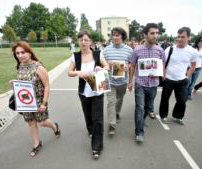 TBILISI, DFWatch–Press freedom has been improved in Georgia, judging by the latest annual index published by Reporters Without Borders. The country has moved up 15 places and is number 69 among 180 countries.

The last time Georgia listed this high was on the 2007 index – in the mid years of the Saakashvili regime, and before the storming of Imedi TV and the crack-down on dissent the following years.

After the change of power in 2012, Georgia has steadily recovered from its toughest period since independence, in terms of press freedom.

“After electoral turmoil in 2012 and 2013, Georgia has begun to reap the fruits of the reforms undertaken in the recent years, even if political rivalry has sometimes hampered their implementation. Transparency about media ownership has improved, although news outlets are politically polarized and still not very independent,” the 2015 World Press Freedom Index reads.

Georgia has the best results in the region. Azerbaijan is 162nd, Armenia 78th, while Russia is 152nd and Ukraine 129th.

The country had more press freedom before the Saakashvili regime came to power in the peaceful coup known as the Rose Revolution. In 2003, the year when the Eduard Shevardnadze was deposed, Georgia listed 73rd.