Georgia cleaning up prison mafia in wake of inmate death

Georgia cleaning up prison mafia in wake of inmate death 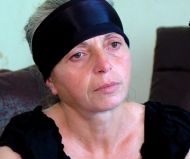 Khatuna Kortava said earlier her nephew was a victim of a system of abuse, mafia and murder in Georgian prisons. (Interpressnews.)

TBILISI, DFWatch–The Prosecutor’s Office in Georgia has charged prisoners and prison administration employees with causing the death of Levan Kortava, who was allegedly killed by the so-called thieves in law inside prison.

Kortava died May 23, 2013, at the prison hospital, after being moved there from the prison in Geguti, a village in western Georgia.

On Tuesday, the Prosecutor’s Office presented new charges against mafia figures Gela Ushkhvani, Solomon Dashniani and Teimuraz Gureshidze. They are charged with being ‘thieves in law’ – members of the “Russian mafia” – for beating and of having together with others deliberately inflicted injury which caused the death of another person.

According to the Prosecutor’s Office, a criminal prosecution is launched and soon new charges will be presented against some of the staff at Prison No 14: Director Malkhaz Sinauridze, Deputy Iveri Gogiberidze, inspectors of the security department Ilia Shanshashvili and Tengiz Nasareia, inspector Alexandre Babunashvili and social worker Giga Kokhodze. Another prisoner, Giorgi Shemazashvili, is also charged.

On the day of Kortava’s death, the Prison Ministry stated that a prisoner had died after slipping on the stairs and hitting his head. Later the same day, the ministry corrected its initial statement and wrote that Kortava died as a result of a conflict with other prisoners.

Former President Mikheil Saakashvili’s party the National Movement drew attention to the Kortava case in its election campaign this year, but the victim’s aunt Khatuna Kortava said she did not want the National Movement to score political points on the case and accused Saakashvili’s allies of having created a culture of abuse, mafia and murder in Georgia’s prison which ultimately caused her nephew’s death.