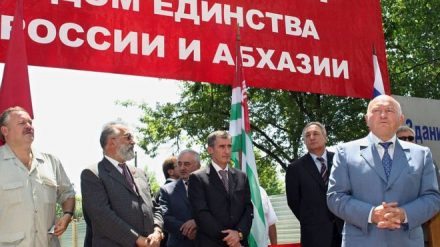 In this photo from 2006, Yuri Luzhkov (right) is seen in Abkhazia with Abkhaz and Russian politicians. (Alexander Popov/TASS.)

TBILISI, DFWatch–Georgia has placed the former mayor of Moscow on its ‘black list’ of people barred from entering the country. Yuri Luzhkov was briefly in Georgia last weekend and the opposition called for his prosecution for violating a 2008 law.

When Luzhkov’s tourist trip became known it caused an outrage. He is known as a strong supporter of the independence of Abkhazia and South Ossetia, two Georgian regions propped up by Russia, and has visited there several times, apparently in violation of a Georgian law that prohibits crossing the border points from the Russian side.

Georgia’s Ministry of Internal Affairs said in a statement that Luzhkov visited breakaway Abkhazia back in 2010, while the law has a statue of limitations of six years, thus making it legally impossible to open a criminal case against the former mayor.

But he will be banned from returning to Georgia. Deputy minister of interior Shalva Khutsishvili said Thursday that Georgia has included Yuri Luzhkov on its ‘black list’ of people barred from entering the country.

Luzhkov was seen in Georgia on May 7 and 8, and visited a church in Kanda, a village 40km west of Tbilisi.

Luzhkov with his wife and friends entered Georgian territory by a van from Armenia, through Sadakhlo border crossing. He possessed a valid passport, which didn’t contain any sign of him violating Georgian law, therefore the customs official let him into Georgia, the MIA states.

In Georgia, Yuri Luzhkov visited several historical and religious landmarks, including the Temple of The Thirteen Assyrian Fathers in Kanda, a village inhabited by ethnic Assyrians who were relocated to then Tbilisi governorate during Tsarist times.

Luzhkov gained prominence in Russia by his successful management of Moscow’s economy and large-scale construction projects. He was at some point even thought of as President Boris Yeltsin’s successor in the late 1990s, before Vladimir Putin’s promotion.

He had tough relations with President Putin yet enjoying significant popular support in Russia. Luzkhov was dishonorably dismissed in 2010 and replaced by Sergey Sobyanin, a close Putin ally.

Yuri Luzhkov has often been accused of corruption. Critics point out that his wife Elena Baturina built her billion dollar fortune over the course of Luzkhov’s mayoral tenure.