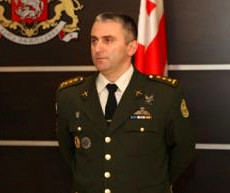 45-year-old Chachibaia, who served as chief of the Joint Staff of the armed forces during the 2008 August War, will replace Major General Vakhtang Kapanadze as his tenure expires and is due to continue working as Georgia’s senior military envoy to NATO.

Monday evening, Chachibaia presented his views and future plans during a session of the of the National Security Council which the president attended.

General Chachibaia graduated in 1993-94 from the United Military Academy in Tbilisi. In 2007 and 2008 he attended several military training courses in the United States, including at the U.S. Army War College.

He was commander of a Georgian contingent within the multinational force in Iraq in 2004 and served as a senior adviser under the NATO-led mission in Afghanistan.

In 2009, following the Russia-Georgia war, he briefly served as deputy defense minister.

Since 2012, he has served as deputy chief of the General Staff of the Georgian Armed Forces and as a principal of the National Defense Academy.