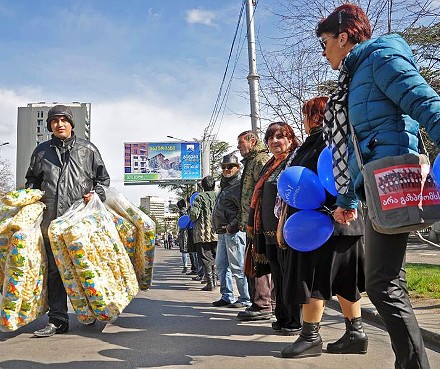 TBILISI, DFWatch–Georgia has agreed to less favourable conditions for allowing its territory to be used by Russian energy giant Gazprom to transit natural gas to Armenia. The resulting deal is is expected to be met with harsh criticism from the opposition and local energy experts.

The government has refused to disclose the details of the new agreement, but it is clear that Georgia will no longer receive a share of the gas as payment but get money instead. This was a long-time demand by the Russian side which Georgia resisted.

On January 10, at a meeting in Minsk, Georgia’s Energy Minister Kakha Kaladze reached an agreement with the officials from the Russian state owned Gazprom Export to monetize payment for services of transiting Russian gas through Georgian territory to Armenia for the next two years. But by 2018, the Russian government will begin issuing payment in cash.

Elena Burmistrova, Director General of Gazprom Export, hailed the successful outcome of the negotiations, which will mean Gazprom’s export will supply Georgia with natural gas on flexible terms at a price that is USD 30 per 1,000 cubic meters lower than it was in 2016.

“As a result of a series of meetings and longstanding negotiations, together with our Georgian partners, we have managed to find commercial conditions which are optimal for both sides, and to reach an agreement on the terms of gas transit,” Burmistrova said.

The pipeline from Russia to Armenia, across Georgian territory, has allowed Georgia to use some of the gas for its national consumption – the tap-off currently accounts for 13% of the national supplies – but renegotiating its terms is still a touchy issue because of the tense relationship between the two neighbor countries. Many see the agreement as making the country more dependent on Russia, with which they fought a brief war in 2008 and has territorial issues arising from Moscow’s propping up of two breakaway regions.

Last year, thousands of people protested against the negotiations and linked arm forming a seven kilometer long human chain from the government’s headquarters to the Russian Embassy and chanting ‘No to Gazprom’.

The rally was organized by the National Movement, which accused Moscow of using Gazprom to prevent the country from strengthening its ties with the West.

But Georgian vice premier and energy minister Kakha Kaladze vowed that there is no danger of becoming more dependent and that the two sides reached ‘the best options’ following vigorous discussions. He believes that the agreement will not increase Georgia’s dependence on Russian energy resources.

“We are shifting to monetization of the payment of transit fee only,” Kaladze said.

The minister did not specify the cost of transit of Russian gas, but emphasized that from a financial point of view, Georgia achieved approximately the same result as when Russia paid with natural gas.

United National Movement, the largest opposition party until it split in two a few days ago, disagrees with the minister’s optimistic assessment and asked him to present the details of the deal to parliament.

“Russia has reached its goal, as this agreement is more profitable for Russia. The deal is against the national interests of the country. This is problematic not only with regard to energy security, but also for economic reasons it is unprofitable,” MP Sergo Ratiani from the newly formed European Georgia faction said.

For about a decade, Georgia has been receiving about 10% of the total volume of supplies of Russian gas to Armenia as a transit fee. The agreement between Georgia and Gazprom Export has been updated annually. In recent years, the Russian company began insisting on cash payment, but Georgia insisted on continuing to be paid in raw material.