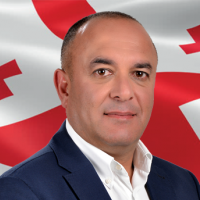 Azer Suleimanov saved the UNM from disappearing in parliament.

TBILISI, DFWatch–The party that ran the former Soviet republic Georgia for nearly a decade has split into three factions in parliament after a long internal feud over the role of its former leader Mikheil Saakashvili.

For a few days, there was doubt over whether what remains of the National Movement would be able to function as separate group in the national assembly, which requires six MPs. Five were committed to staying, but after Azer Suleymanov also decided to stick with UNM, Saakashvili’s party will remain as a faction, meaning that the party has split in three.

After a three months long infighting, 38 heads of municipal and regional organizations and 21 MPs and part of the political board officially left Georgia’s former main opposition party on Thursday.

The breakout faction includes about half of the UNM leadership and most of its members of parliament.

The United National Movement was in power for eight years (2004-2012), pushing through many reforms and drawing popular anger for its hard-handed rule. The recent internal feud centered on disagreement over the role of its symbolic leader, former President Mikheil Saakashvili, who left Georgia after leaving office in November 2013 but has tried to maintain his political relevance in his home country long-distance from his exile in Ukraine.