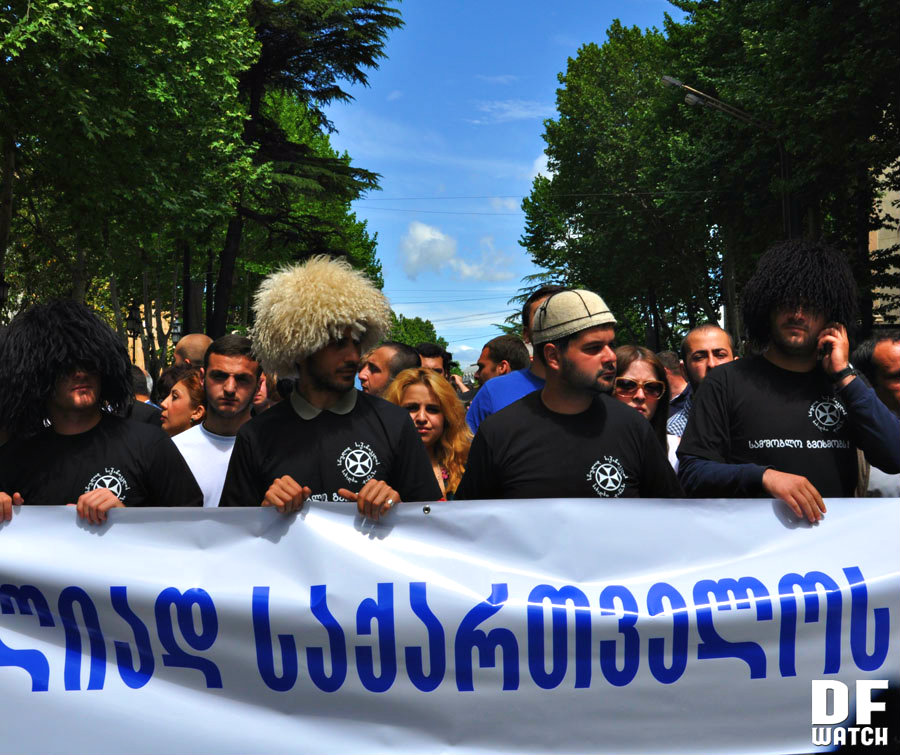 Last year’s conservative demonstrators against the LGBT event May 17, 2013. (Interpressnews.)

TBILISI, DFWatch–There will be no gathering in Georgia today to mark the International Day Against Homophobia and Transphobia. Instead, the Church and conservative groups plan a number of demonstrations to celebrate the recently announced day of family values.

At 10 AM, a protest march started from Tbilisi Event Hall down Rustaveli Avenue toward Freedom Square and will end at the Trinity Cathedral, where the Patriarch of the Georgian Church holds a special prayer at noon.

Also at 1 PM, at the former parliament building on Rustaveli Avenue there is planned a rally against the anti-discrimination law, which was recently adopted by parliament as a part of visa liberalization action plan between Georgia and the EU, triggering resentment among conservatives and the Church.

A peaceful rally of a few dozen LGBT rights activists was brutally attacked by an angry crowd of several thousand, including Christian clerics, on May 17, 2013.

Identoba, an organization defending the rights of gays, lesbians and other sexual minorities in Georgia and the organizer of the 2013 rally, declared earlier that it didn’t plan to hold any such event this year due to security reasons, and instead proposed having an online even.

Celebrating Family Day on May 17 was an initiative by Patriarch Ilia II, head of the Georgian Church.

The Patriarchate, the ruling body of the Georgian Orthodox Christian Church, in a statement  Friday called on all churches to hold a prayer service at 12:00 and consecrate places adjacent to the churches.

The statement reads that for the Church it is unacceptable to “admit homosexuality as a ‘natural condition’ but this doesn’t mean that ‘the Church is fighting against people damaged by this sin. The Church is against any violence.”

May 17 was chosen by the LGBT community and rights activists to commemorate the World Health Organization’s decision in 1990 to remove homosexuality from the International Classification of Deseases.