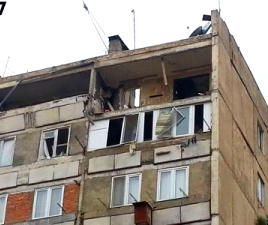 The explosion demolished the eighth floor of a building in Gldani, a district in northern part of the capital, and killed Zoia Kalandarishvili, who was living on the same floor and was hit by debris from the explosion.

A man who was living in the apartment where the explosion happened was taken to the hospital with serious injuries.

Interpressnews reported that a crew of fire fighters and ambulance personnel used a crane to get to the ninth floor of the building.

The crew helped four people get out of the building: the woman who died, the man who is at the hospital, and two more who didn’t need medical assistance.

Davit Gelashvili, Head of the Emergency Situation Management Service told the news agency that at about 7:30 in the morning they were notified that there had been an explosion in the eighth and ninth floors of building No 25 in the second microdistrict in Gldani.

Besarion Kartsibadze, the administrative head of the district, told journalists that the local government will start clean-up work in the building in a few days.

He said the explosion damaged the whole upper part of the building. It may require temporarily relocating several families until the repair work is finished.

The elevator shaft was also damaged, as well as the right wing of the eighth and ninth floors.

The explosion broke windows in some flats in nearby buildings