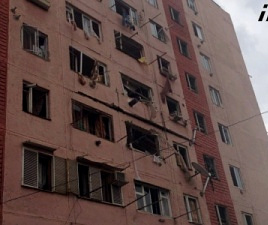 TBILISI, DFWatch–A gas explosion in a suburb of Tbilisi on Tuesday killed at least five, and injured eight. Two girls are in hospital in a serious condition.

The accident happened in the evening, in building 2 in the sixth micro district of Gldani, a suburb in the western part of the capital.

Eight people were taken to hospital, according to Mayor Davit Narmania. Health Minister Sergeenko said the two hospitalized girls are in a serious condition.

Rescue workers are searching the area, while architects are studying the stability of the building, which was evacuated immediately after the explosion.

Officially, the cause of the explosion is unknown, but emergency service employees think it was caused by a gas leak. They also say that the building had three added floors, which collapsed due to the explosion.

The Interior Ministry has started a criminal investigation on suspicion that safety rules have been violated. The specific legal basis is rules for electrical or thermal energy, gas, oil or petrochemical properties.

A woman died in a gas explosion about two months ago in the same area of Gldani; the second micro district.