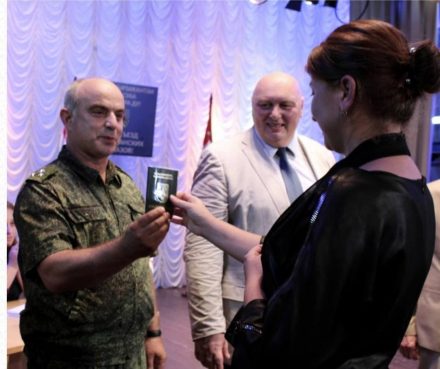 GALI, DFWatch–July 19, a ceremony was held here in Gali to award ‘Abkhaz passports’ to 139 residents who listened to an appeal by something called the Mirzakan Abkhaz Council.

This was was only the latest event organized by the Council in an effort backed by Sokhumi to convince Gali residents to ‘better understand their origins and get back the ancient Abkhazian surnames and Abkhazian ethnicity’.

Spelled out, this means for ethnic Georgians to change their declared ethnicity into Abkhaz, so that they can obtain full civil rights, something they are not able to if they remain registered as Georgians.

This July day, the Sokhumi separatist authorities organized several events here in Gali, including a concert of local school students, but the main event of was that of the Mirzakan Abkhaz Council.

Mirzakan, in Georgian Samurzakano, is a historical province of western Georgia, named after its ruler in the early 18th Century, Murzakan Sharvashidze. The territory ruled by Murzakan and his heirs roughly corresponds to what is today the Gali district of Abkhazia, a region that broke away from Georgia in 1992 and remains an unsolved conflict with hundreds of thousands of internally displaced.

This Council was created in 2014 but has only recently started making inroads in Gali’s public life.

Tengiz Inal-ipa, the head of the council, claims that they conducted a survey which found out that about 5,000 Gali Georgians have Abkhaz roots but were forcibly ‘Georgianized’ by Joseph Stalin and Lavrenti Beria. The former was a fearsome head of NKVD, the predecessor what later was known as KGB.

Up to 500 Gali residents have applied to the ‘Abkhaz passport’, Inal-ipa said. 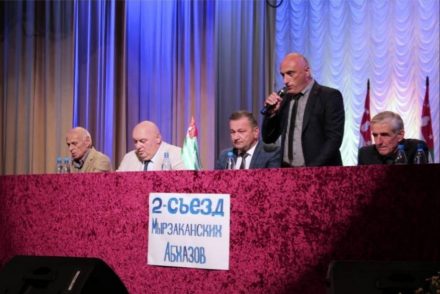 A teacher who wants to remain anonymous told us the Sokhumi de facto authorities are irritated by the low percentage of ethnic Abkhazs in this southernmost districts and decided to change the demographic balance.

People who ‘discover’ their Abkhaz descent are promised certain privileges, the most attractive of which is obtaining an Abkhaz passport, without which many things are difficult to do, such as getting a job, traveling within and out of the separatist republic, selling or purchasing real estate, and setting up a business.

The teacher we spoke to rejects the notion of forcible Georgianization as a falsification of history and claims that many Georgians changed their ethnicity to Abkhazian instead, as even during the Soviet Union, Abkhaz had some tangible privileges as a minority ethnicity.

A small portion of ethnic Georgians in Gali have obtained Abkhazian passports in exchange of changing their ethnicity on paper, but they were pressured by the circumstances and had no other choice, he said, adding that this is not common and that Sokhumi’s efforts are in vain.

“[Ethnic] Georgians are not recognized as full citizens and some people are compelled to obtain ‘Abkhaz passports’ if they manage to do so,” he said. “[Sometimes] Abkhaz passport is a means of survival here. It means unhampered business, the right to ownership, freedom from pressure of any kind and normal living condition. There is a certain part of [ethnic] Georgians who have changed their ethnicity but it’s not a massive process.”