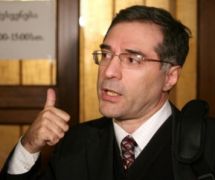 How Europe should respond to Putin at the Riga Summit

Against the backdrop of a rain of bullets, and the rumble of tanks and cannons, Europe is preparing for the Riga Summit in May. Expectations are already low, but one likely positive decision is visa liberalization – the only tangible signal that Georgians and Ukrainians may hear in Riga.

Meanwhile, Georgians and Ukrainians, as well as Moldovans, are far more interested in getting a clear answer to the question: Whether they are regarded as citizens of European states and whether or not they are entitled to become part of the EU?

The most obvious feature of Kremlin politics in the last decades is that any country which makes a Euro-Atlantic choice becomes a victim of its aggression: Russia annexes, occupies, creates internal territorial problems.

Yet, some European leaders say that they do not want to see countries with territorial problems as members of the European Union.

It is clear that Russia is telling the West that these countries have problems, and therefore have no chance…

In a similar logic: We – Georgians/Ukrainians/Moldovans – are told that not because of the occupation itself, but because of problems originating from the occupation, we have no chance of approaching European standards. Hence, the logic goes, we have to settle our relations with the occupying power. This is, to put it mildly, quite a strange argument.

This is one significant reason why Russia should not win the war with Ukraine, because it will inevitably lead to a new wave of vengeance upon the nations that want independence and will become a new major source of destabilization in Europe, with dire consequences.

The question we ought to ask ourselves now is: Will Putin stop after dismembering Ukraine?

It is clear that when someone gives in to Putin, it will only encourage him!

What would be the correct message to send from Riga to Georgia, Ukraine and Moldova… and Russia? An official statement by the EU that aggression from a foreign country, annexation of territories and occupation of part of the country cannot become an obstacle to EU membership.

This would be an adequate response from Europe, whose policy is founded on moral principles and ideals of freedom.