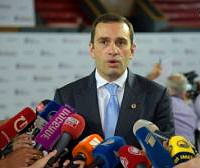 TBILISI, DFWatch–The Free Democrats, a party which withdrew from the ruling Georgian Dream coalition in 2014, on Saturday named its candidates for majoritarian MPs in the October 8 parliamentary election.

The nominees were selected on Saturday during a party congress, covering all electoral districts in the capital, as well as almost all regions in Georgia.

In his speech, party leader Irakli Alasania promised to solve the conflicts with the breakaway territories through reconciliation. He also promised that the Free Democrats will develop the agriculture sector and improve infrastructure.

“We will spend one and a half billion on social issues. Pension will become 300 laris,” he said, adding that there will be a minimum wage of 500 laris.