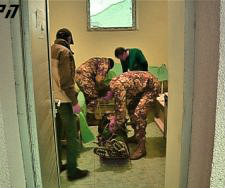 Two German and two French citizens died in Ushguli, a village in the north of Svaneti, Georgia. (Interpressnews.)

TBILISI, DFWatch–Four tourists have died in an avalanche in Ushguli, a village in the Upper Svaneti region, north in Georgia.

According to the local government in Mestia, two German and two French tourists have died.

One French tourist survived. His health is in no danger.

The avalanche took place on March 6 in Ushguli.

According to Neli Naveriani, Deputy Gamgebeli of Mestia, the tourists were warned about the risk of avalanches.

The bodies of the dead tourists have been taken to Mestia.

The five tourists were skiing in Ushguli-Kvemo Svaneti.