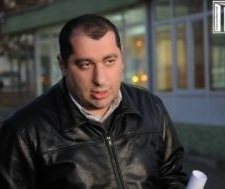 TBILISI, DFWatch–The Prosecutor’s Office in Georgia has ordered the detention of a lawyer for former Defense Minister Bacho Akhalaia.

Giorgi Oniani is charged with abuse of power, falsification of evidence about especially grave crime and purposeful unlawful detention.

He held a high position in the police during Saakashvili, but after the change of government in 2012, he became a lawyer and is currently representing Bacho Akhalaia, the former prison and defense minister on trial in one of the most high profile cases against former officials in Georgia.

Oniani was detained Sunday evening. Later, at night, it was reported that he was taken to the heart clinic in Tbilisi for a few hours, then brought back. His lawyers said he had no traces of physical violence and explained that he needed medical treatment for emotional reasons.

The Prosecutor’s Office said Monday that Oniani in 2011, as Deputy Head of Gldani-Nadzaladevi police department, detained Davit Shatirishvili, manager of Dao Print LTD, a company which was printing logos on t-shirts for the Georgian Dream coalition.

The detention was aimed at interrupting the coalition’s political activity and to scare people with different political views, investigators claim. They say Shatirishvili was illegally detained and accused of keeping drugs.

“Oniani presented marijuana to the investigator of the case and instructed [him] to observe the withdrawing of marijuana during a personal search of Shatirishvili, which in fact didn’t take place,” The Prosecutor’s Office claims.

Shatirishvili held a press conference to speak about how he was pressured by Oniani and how he was detained. He said he appealed to Prosecutor’s Office to investigate this case last year.

Members of the National Movement claim the detention of Oniani is political pressure and that the reason he was detained is that he was planning to participate in the upcoming local elections.

Until now, it has never been reported that Oniani wanted to go into politics.

As he was taken toward a police car, Oniani told Rustavi 2 that his detention was politically motivated. He claimed that he was planning to run as a majoritarian member of Tbilisi City Council. He continued claiming that when the government learned about his plans, his assistants were questioned by the police and forced to give false testimonies against him.

Some UNM MPs speculate that the detention of Oniani may be related to his being a lawyer for Akhalaia, who was recently partly acquitted by a court but found guilty in some of the charges. There are several cases against Akhalaia currently making their way through the court system.

On Monday, Philip Dimitrov, the European Union’s Ambassador to Georgia, asserted that the views of the international community should be taken into account in ‘such cases’.

Any time an opposition figure is detained before an election, it causes suspicions and concerns, he claimed, so every time this happens, it should be well-founded.

Speaker of Parliament Davit Usupashvili, on the other hand, underlined that the court system should not close down during election time.

“It is hard to find a year in the calendar when there are no elections in Georgia. If elections are conducted in Georgia, it doesn’t mean that the police and the Prosecutor’s Office should take a vacation,” he said, adding that if there is something to investigate, it should be done.