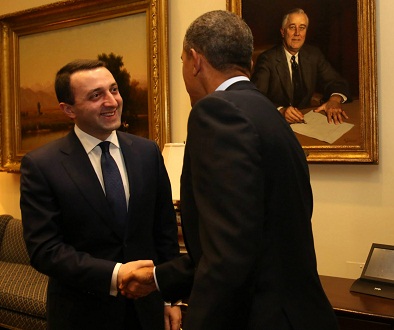 Topics included the US-Georgia strategic partnership, the prospects for Georgia’s integration with the EU and NATO, and reforms conducted during the last year.

Foreign Minister Maia Panjikidze, who was also present at the meeting, told Imedi TV that the president expressed his support for the new government in several important issues.

“He said that there was no-one in the building who doesn’t support Georgia’s territorial integrity, Georgia’s sovereignty, Georgia’s free choice to become member of large European family,” she said, adding that Barack Obama thanked Georgia for his contribution to operations in Afghanistan.

Panjikidze said, during the meeting the PM noted that despite the strategic partnership between the US and Georgia, there is no economic relationship adequate for political relations between the two states. She said the president responded that he will help, and promised that special measures will be taken so that Georgia and US will have strong economic relations.

“Special groups may created which will assist Georgia by giving advise. We also have a meeting with the US high representative for trade issues the day after tomorrow, and we will start a dialogue about free trade,” Panjikidze continued.

“They welcome the creation of deep and comprehensive trade relations with the EU, which should make our country even more attractive for direct foreign investments.”

The Georgian delegation informed the US about recent reports that Russians resumed the moving of the border in the conflict zone on Monday.

Gharibashvili said the government appreciates that the US condemned the Russian actions – constructing barriers and fences. He hopes this kind of moral support will continue in the future.

The Georgian PM further invited Biden to Georgia and said such a visit would be another demonstration of support for Georgia and underline the importance of retaining stability in the region.

The PM said the meeting was really fruitful.

“The US is the most strategic partner for us and we will work to deepen and strengthen this relationship as much as possible, and take the relations with the US to a different level,” Gharibashvili said after the meeting.