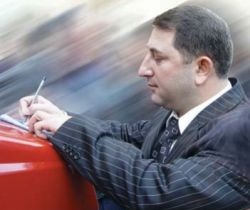 Bondo Shalikian was member of parliament in Georgia and had a reputation as a mafia boss. He was shot to death in Minsk on August 7. (IPN.)

TBILISI, DFWatch – The former member of the Georgian parliament and mafia boss Bondo Shalikian has been shot and killed in Minsk, Belarus. According to Belarusian police, the murder took place in the night of August 7.

Investigators in Belarus are working from the theory that it was a contract murder motivated by a conflict between criminal groups.

Shalikian was claimed to be a mafia boss. His troubles with law enforcement in his home country drove him to leave, and he settled in Russia, becoming a citizen there. He went into politics in the end of 1990s, was elected member of Kutaisi city council in 2002, in 2003 he was elected as member of parliament from a single-mandate district in Tkibuli, Imereti.

In 2004, Shalikian was arrested in his home in Kutaisi on charges of tax evasion and illegal gun possession. Then minister of internal affairs Irakli Okruashvili personally headed the operation. Though he was freed and allowed to leave the country soon after the arrest, his property and businesses were seized, including a chain of gas stations, his shares in a car factory, a pharmaceutical factory, a TV company in Kutaisi and his oil business in Imereti.

It was claimed by the prosecutor’s office that he agreed to compensate the damage he had caused to the state. In one of his last interviews given in June of 2012, he claims the net worth of his confiscated businesses to be about one hundred million lari, and he also mentions a phone conversation with the prosecutor for the region Imereti about voluntarily ceding an office in Kutaisi to the state.

In 2007, the Georgian ministry of internal affairs resumed the criminal prosecution against him for crimes committed in the beginning of the 1990s. He has been accused of having connections with kidnapping and extortion and been a member of the criminal world, and was sentenced to 13 years in prison in absentia.