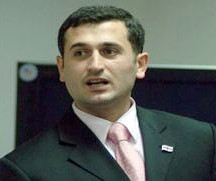 Former Kvemo Kartli governor Davit Kirkitadze is accused of having used state-owned machinery to carry out construction work at two car outlets along the Tbilisi-Rustavi highway.

The work took place in 2011-2012 and the machines, belonging to Kvemo Kartli governor’s office, were used for work at the vehicle vendors AutoHouse Rustavi 2011 Ltd and Titani Ltd both of which belonged to Kirkitadze’s brother Irakli Kirkitadze and former official Giorgi Udesiani.

Kirkitadze didn’t show up at the Prosecutor General’s Office, and the office will therefore ask for an order to have him placed in pre-trial detention and declare him a wanted person.

The lawyer of the accused Giorgi Kondakhashvili told Interpressnews that Kirkitadze has been in the United States for several months in connection with studies, so he is not running away from the law.

The lawyer said he was in Georgia for two and a half years after the investigation was launched, but when he was asked to give his statement he had left for the U.S.

Kirkitadze told the TV channel Rustavi 2 by phone that he does not plan to come back to Georgia until he has finished his studies in six months. He believes the charges are a form of political persecution.

From 2011 until January 4, 2015, he was in Georgia, he said, and during that time he was ready to answer questions to investigators. He said ‘they’ knew he was leaving to study and found the ‘perfect time’ to charge him. He returns on June 10.

Kirkitadze thinks the charges are ‘ridiculous.’

“I don’t plan to cancel my plans only because some Russian oligarch, who drags the country into a gap, wants it.”