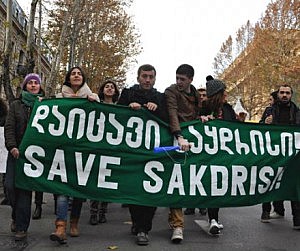 TBILISI, DFWatch–In Georgia, the ombudsman claims that a government official broke the law when he greenlighted the destruction of a 5,400 year old cave complex with invaluable archaeological findings.

In December, the Russian company RMG Gold resumed mining blasts in Sakdrisi mine near Bolnisi in southern Georgia, destroying most of the archaeological interesting parts.

The blasts came as a surprise to environmentalists and archaeologists who had been campaigning for the the last year to save the site, also going on hunger strike and organizing concerts, after RMG Gold, which was doing extraction work in the area, set its sights on the ancient cave complex.

Since a lawsuit is in progress, and the court had ordered work to halt until a ruling has been made, it was unexpected that RMG Gold would suddenly resume open-case mining without any warning to the public.

But it was made possible by a decision by the head of the Cultural Heritage Protection Agency, Nika Antidze, which brought into force an order by the Culture Ministry a year and a half before on July 5, 2013 that the mine should no longer have status as protected cultural heritage site.

The ombudsman writes that the site’s heritage status was lifted in violation of law: The Culture Ministry’s decree was first abolished on December 12, 2014 in a decree by the then culture minister, a different one than when the decree was issued, he writes.

When making such a decision, the issue hadn’t been studied objectively by taking into account all conditions, the ombudsman argues. Also, all stakeholders were not allowed to participate in the decision making process, the statement continues.

The statement lists the laws and regulations which were violated in the process: Constitution of Georgia, the Universal Declaration of Human Rights, International Covenant on Economic, Social and Cultural Rights, the European Convention on the Protection of the Archeological Heritage, the Aarhus Convention, the Law of Georgia “On Cultural heritage” and the General Administrative Code.

The ombudsman recommends that a decision to lift the heritage status must be made in cooperation with stakeholders and after examining the circumstances.

Locals in Bolnisi are to a large degree dependent on jobs in the mining company for their livelihood, and have demonstrated for allowing work to go on.