Islam expert doesn’t see any rise in islamophobia in Georgia

Islam expert doesn’t see any rise in islamophobia in Georgia 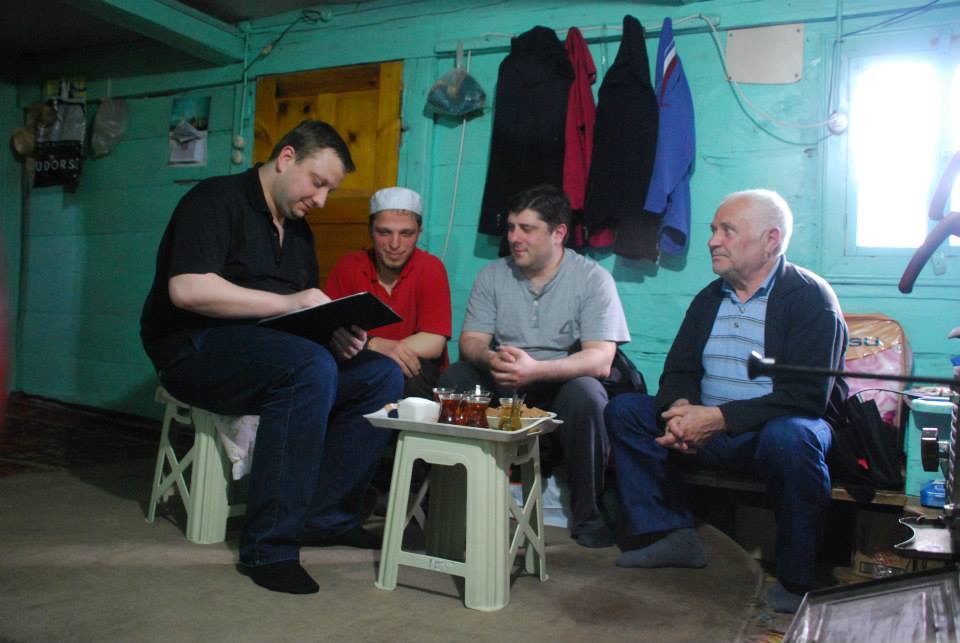 Ruslan Baramidze (on the left) during a field work

It is harder to be a Muslim anywhere, when international media headlines are dominated by terrorist groups, such as ISIS or Boko Haram. In Georgia, one out of ten citizens is a Muslim. What do we know about Islam in Georgia? Is Islamophobia on the rise here as well? DFWatch discussed these and other questions with senior researcher at Batumi Shota Rustaveli university, an expert on contemporary Islam in Georgia Ruslan Baramidze.

In general, do you see a rebirth of Islam in Georgia?

It would be misleading to talk about rebirth of Islam, because this religion was never actually gone. But what was and is happening, is a turn from tradition-based Islam to more book-based Islam, as well as its institutionalization. The institutionalization of Islam started back in the 1990s, and climaxed in 2011, when the Georgian Muslim Board was registered. Along with this, there were other processes as well, such as sending youth to receive religious education abroad, increase in finances, Islam getting more popular because of various activities in the social and political spheres.

To put it shortly, there was no rebirth of Islam in Georgia, it just became more public and more official.

Also, when we speak about Islam, we need to ask ourselves a question, who are we dealing with, a religion or different Muslim groups each with their own agenda, starting from the Muftiate and ending with various NGOs?

Can you tell more about these different interests groups?

Firstly, there is no common perception of Islam in Georgia, and different Islamic groups have different views towards Muslim society.

The main division lines of Muslims in Georgia are of course between shiites and sunnis, and between different ethnicities. But that’s not all.

In the administrative level, one can distinguish two different groups. One consists of younger, educated and ambitious generation, who are ambitious and do not forget their own personal careers when they strive for certain religious goals. Another one is of very communicative men, who are good in negotiating with the government and local authorities.

Apart from these, there are also marginals, who do not like what is going on in Islamic community nowadays. Although they are more fundamental, these people are more secluded and their agenda is manifested only in soft forms, such as clothes, behavior, ideas about Muslim society and its norms.

And there are more radical groups, which tend to turn their ideas into actions and are actively recruiting supporters through social media, newspapers, etc. But these radical groups are small, because they separated from the mainstream religious path not too long ago and their ideas are not always popular among other Muslims.

Do you see any changes in attitudes towards Muslims in Georgia in the light of constant reporting on ISIS fighters from Pankisi, men killing their wives in Kvemo Kartli or terrorism act in Paris?

I do not see any changes. Socially active members of our society see them as a normal religious group which has its own rituals, traditions and is preoccupied with it. However, the general society just does not see Islam as a part of Georgian identity. Well, they see Georgian Muslims as Georgians, but just partially.

Also, attitudes towards Muslims are strongly influenced by social experience. For example, in schools, students are taught that Islam was always connected with aggression and war, so many people see it as an aggressive religion.

Despite that, I do not notice any general aggression towards Muslims in Georgia. Of course, there are some clashes on individual level, but all these conflicts which were happening in various places in Georgia are most likely personal, and not inter-religious. Contrary to what media, various organizations and interest groups have presented. I follow such events closely, and sometimes it looks like it was meant to happen, because tension was already high.

Thus I think that today there is no aggressive Islamophobia in Georgia. Of course, the situation might change, just like in any other country.