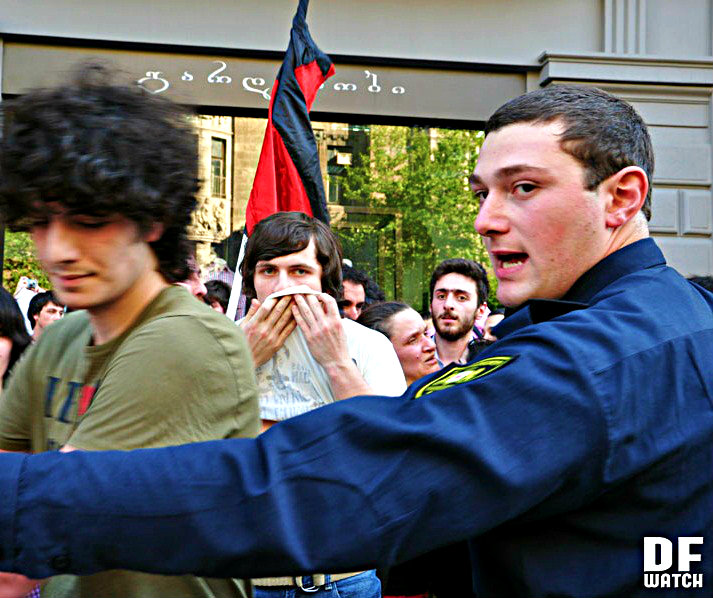 A demonstration to support labor rights May 1 was violently dispersed by police. (DFWatch photo.)

TBILISI, DFWatch–Tbilisi City Court has fined five participants at a May Day rally in Tbilisi with 400 GEL (USD 240). About two dozen other participants are awaiting sentencing in two months.

The five were fined for petty hooliganism and for disobeying police orders.

According to Laboratoria 1918, the youth organization which organized the rally, five of its members have been given seven days to pay the fine.

May 1, a peaceful demonstration to mark the International Workers’ Day turned into a violent confrontation as police tried to clear the streets to allow traffic to pass.

The police had not been warned about the rally, but current legislation says it is legal to have an unannounced political gathering as long as it stays on the sidewalk and doesn’t block the road, and it may even block traffic if too many people unexpectedly show up in order for all of them to be able to stay on the sidewalk.

Demonstrators claimed they should be protected by this provision in the law, but police intervened to open the road to traffic.

More than 20 demonstrators were detained, but they were released later the same day.

Participants were detained for vandalism as some of them wrote different messages on walls and police claims that they also destroyed cars belonging to a civilian and to police.

The May 8 hearing only concerned five members of the organization. Hearings for the rest of them will be held in the next few days. The fined students have not yet decided whether to appeal the decision.

“Police wasn’t able to present even a single piece of evidence against those people,” Laboratoria 1918 writes on its official Facebook page. “In addition, none of the policemen present during the trial were those who detained the five persons, but they claimed to have detained them.”

The organization claims that the court doesn’t listen to any of their video evidence or witnesses testimonies.

“If it is an unfair war, let it be a war,” the statement reads.