Feminists protest against abortion ban outside Poland’s embassy in Tbilisi

Feminists protest against abortion ban outside Poland’s embassy in Tbilisi 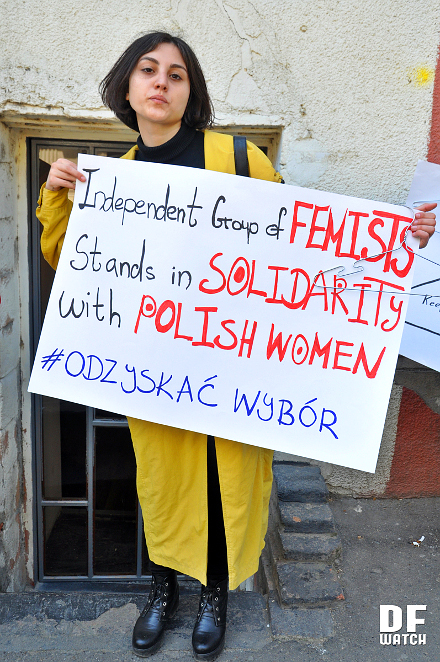 TBILISI, DFWatch–Nearly 20 people gathered Friday outside the Polish embassy in Tbilisi to show solidarity with Polish women trying to stop a proposed ban on abortion in their country.

The gathering was organized by Independent Group of Feminists and participants held up posters with messages like ‘My body, my business’, ‘Abortion is a personal decision, not a legal debate’ and ‘Keep abortion safe and legal’ in Polish, Georgian and English language.

Emanuela, a young Polish girl who moved to Georgia five months ago, told DF Watch that she suffers every time something bad happens in Poland and she cannot be there so she was happy when she heard about the planned protest in Tbilisi.

“My body is my body, so I should decide about my body. This is only my problem and not a problem of church people for sure, who now wants to decide about our bodies, our genitals, our pussies, and it is going too far and I think that they’ve already crossed the border,” she said.

No-one came out of the embassy to talk to the crowd, but passers-by reacted in different ways.

Two boys approached asking what the rally was about. One of them introduced himself as a medical student planning to become a gynecologist. Tamar Gurchiani, one of the participants of the gathering, explained to him that they are against banning abortion, not supporting abortion, and that a woman’s body belongs to the woman, not to others.

“But what about the baby, have you even seen how abortions are done?” the boy asked, later making fun of the participants by saying that he has never seen such a big rally.

An old woman passed by and slowly approached, asking what was happening.

“Where were you years ago, I have done tens of abortions myself,” she said.

Organizers of the gathering explain that Poland has a restrictive abortion laws as it is, with abortion illegal in most circumstances, except when the woman’s life is endangered, the fetus is malformed or the pregnancy is the result of a criminal act. The proposed changes will bring in a complete ban on abortion, as well as restrict access to contraception.

“We believe that access to legal and safe abortion and contraception is a fundamental women’s right and restrictive laws should immediately be overthrown,” they said.

The demonstrators believe that the proposed law in Poland will have a negative influence on the country’s image abroad, as a secular democratic state that upholds the human rights of all of its citizens.

“Independent Group of Feminists calls on politicians in Poland to immediately fulfill the demands of the movement “Reclaiming Choice” (Odzyskać Wybór).”