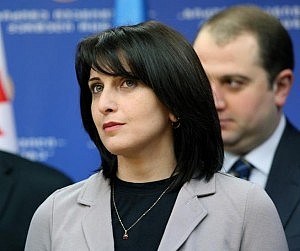 TBILISI, DFWatch–The human rights committee in parliament on Monday rejected a proposal by two MPs from the majority faction to make femicide a crime.

It would have taken seven votes for the committee to approve the draft. Only three voted for it; two from the party Georgian Dream – Democratic Georgia and one from the Republican Party.

No-one voted against the bill, but during the discussion, majority MPs Soso Manjavidze, Dimitri Lortkpanidze and Gedevan Popkhadze did not support it.

The bill was introduced by MPs Tamar Kordzaia (pictured) and Tamar Khidasheli and is an amendment to the Criminal Code. It would define femicide as a premeditated murder of a woman based on her gender and set punishment for femicide as a particularly severe crime.

The bill also proposes to define it as aggravating circumstances if the crimes seriously or lightly injuring, beating, forcing or threatening are based on gender.

The bill’s explanatory note explains that in 2015, there were launched 26 investigations for murder or attempted murder of women. Two women died as a result of domestic violence. In 2014, 33 women were murdered.