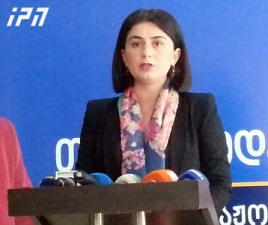 TBILISI, DFWatch–Two MPs from the parliamentary majority have proposed adding to the Criminal Code a separate offense called femicide, which is the premeditated murder of a woman on the basis of her gender.

The bill sets punishment for femicide as a particularly severe crime.

The authors of the bill are MPs Tamar Khidasheli and Tamar Kordzaia. According to bill, premeditated murder of a woman by her husband, ex-husband, partner, ex-partner or any other family member will be punished with from 11 to 14 years in jail.

In case the murdered woman is pregnant, a minor or in a serious condition, or if the crime is committed by a group, punishment will be from 13 to 17 years in jail. If there are two or more victims, the murder is particularly brutal or is a contract killing, it will be punished with 16 to 20 years or life imprisonment.

The bill also proposes new categories of crimes: in cases of seriously or lightly injuring, beating, forcing or threatening, if these forms of crimes are based on gender, they will be categorized as crimes committed under aggravating circimstances.

The explanatory note of the draft explains that in 2015, there were launched 26 investigations for murder or attempted murder of women. There were two cases when the women died as a result of domestic violence. In 2014, there were 33 cases when women were murdered.

There have been more than 60 gender-based murders and murder attempts in the last two years in Georgia.