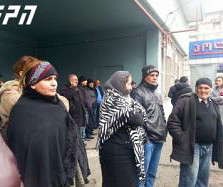 TBILISI, DFWatch–Relatives of a 17 year old girl who was abducted three days ago protested outside a police station in Tbilisi on Sunday, demanding that something is done to find the kidnap victim.

Samira Bairamova (17) from the predominantly ethnic Azeri village Ponichala outside Tbilisi disappeared three days ago in what appears to be a case of so-called bride theft.

Her family claims an unknown young man took her, with the assistance of other men. Samira’s mother also claims that her daughter didn’t know the kidnapper and that she was not in love with anyone.

During a protest Sunday evening outside the police station, relatives said that Samira managed to call her uncle to ask for help. She said she was ‘somewhere near parliament’.

Angry relatives blocked the Rustavi-Tbilisi highway for some time, claiming that the police is doing nothing and cannot even determine the location of the kidnapped girl.

Members of her family say the man they suspect of kidnapping her is a minor himself, but there are others with him who are over 30.

“We know some of their names and told them to the police, but no reaction,” they say.

Later on Sunday, there were reports that the abducted girl would be brought to the police station by the kidnapper, and relatives waited there for her until the end of the day, but in vain.

Daniel Mgeliashvili from the ombudsman’s office, who came to the police station in Ponichala, told journalists that the office has been studying the case for three days. He said that he spoke with the parents of the man whom Samira’s parents are talking about. He also informed that members of this man’s family are being questioned by police.