Families rally in support of prisoners on life sentences

Families rally in support of prisoners on life sentences 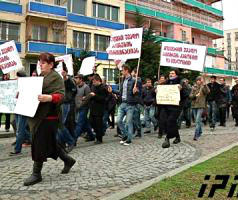 Families demand life sentences converted so the prisoners may have hope of being free some day. (Interpressnews.)

TBILISI, DFWatch–Families and relatives of prisoners with life sentences and incurable diseases rallied in front of the government house in Adjara on Thursday.

They demand that the prisoners are offered a new chance to have their cases reviewed and their sentences reduced in accordance with the mass amnesty which freed more than half of all inmates two years ago.

Shadie Dumbadze is mother of a prisoner on life for drugs crime. She told journalists that she doesn’t know whose drugs they were.

“They attacked him, beat him and then blamed him of having drugs,” she said, adding that she wants a new investigation.

Dumbadze blames the Saakaashvili regime of having threatened her son to keep silent, and she was hoping that the new government would revise old cases.

Protesters said this was a warning rally, and that they may demonstrate again if the government doesn’t come through for them.

Meanwhile, prisoners with lifelong sentences in Tbilisi and Rustavi are continuing their hunger strike. They demand to have their cases reassessed and converted to a fixed term, to be reduced in accordance with the 2013 mass amnesty.