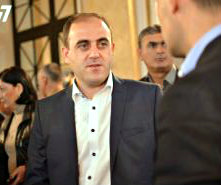 Mayor Davit Narmania denied that he is an old friend of the accused, Jokia Bodokia. (Interpressnews.)

TBILISI, DFWatch–The head of City Hall’s supervision service pleaded not guilty in the case of taking a bribe in return for facilitating the construction of a new hotel.

Jokia Bodokia was detained on Wednesday.

His lawyer, Giorgi Kavlashvili, told journalists that his client is using his right to remain silent, but is categorically opposed to the ‘formulation of the charges’ – that the crime is connected to his job at City Hall.

He said Bodokia claims it wouldn’t have been related to his position and duties at the supervision service.

The Prosecutor’s Office plans to ask the court to place him in pre-trial detention, while the defense lawyer will ask for his to release.

Bodokia is accused of accepting a USD 180,000 bribe to help a certain company get a permit to build a new hotel. He is to have received USD 50,000 of the promised amount as a prepayment. If convicted, he may be jailed for up to 15 years.

Giorgi Alibegashvili, head of Tbilisi City Council, said on Thursday that it is unfortunate, but everyone must be held to account under the law, no matter who it is and from which party.

After Bodokia’s detention, there were reports in the media that he comes from the same village and is a classmate of Mayor Narmania and that his brother backed Bodokia. The mayor denied this. He said after the government session that it is ‘absurd.’

He said his brother is a lawyer and has no connection to this case. And besides, he is abroad. The mayor also said that Bodokia was born in Tbilisi and is a few years older than him, so they wouldn’t have been classmates.