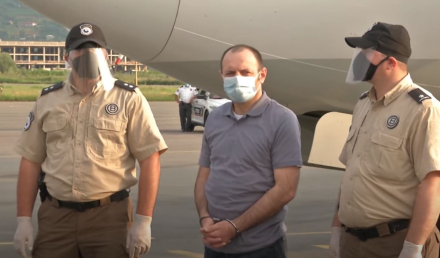 Davit Chakua (center) upon his extradition in Batumi airport. (1tv.ge)

TBILISI, DFWatch–Germany Friday extradited the former head of Georgia’s prison department Davit Chakua, who is charged with abuse of powers, humiliating and inhumane treatment, provoking a crime, falsification of evidence and influencing a witness.

A plane with Chakua on board landed at Batumi airport.

The 44-year-old was declared wanted through Interpol in 2013, and is also implicated in other cases against former officials.

According to the Prosecutor’s Office, the former justice minister Zurab Adeishvili, who is currently also wanted by Georgia, instructed Chakua to make employees of Prison No 8 organize humiliation, verbal and physical abuse of certain targeted prisoners and film it, then hand the video to the media. This was part of a plan to hurt the Georgian Dream coalition, the Prosecutor’s Office claims.

In September 2012, just a few weeks before the parliamentary election, several videos surfaced showing torture of inmates in Georgian prisons. Most of the videos were filmed in Prison No 8, which is in Gldani, outside Tbilisi. The ensuing scandal helped Georgian Dream take down Mikheil Saakashvili’s United National Movement in the elections.

Davit Chakua is believed to be a key official behind systemic torture and humiliation of inmates in Georgia.