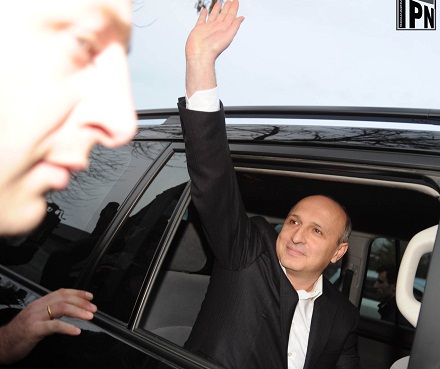 TBILISI, DFWatch — Former Interior Minister Vano Merabishvili was Friday questioned a second time about his attempt to leave the country with a fake passport November 30.

The interior ministry has made public several witness statements seeming to confirm that Merabishvili tried to fly to Yerevan on a fake passport, with his testimony the only one contradicting the others.

But the former strongman and companion of President Saakashvili remained defiant and seemed to enjoy the attention as he waved to crowds gathered outside the prosecutor general’s office.

Merabishvili’s interrogation lasted for five hours. When he left the ministry he didn’t say anything about the questioning itself. Instead he said he was proud that he had to give testimony at a comfortable building where there are well dressed police employees and well-heated rooms.

The new government want the media only to report about detaining, pressuring and interrogating national movement members, he said.

“The government’s goal is not to give the National Movement opportunity to continue criticizing government,” he said, adding that their party members will continue everyday work.

“Me and my friends who aren’t in jail or interrogated will spend all our time so that our party can fulfill its functions and will focus on making new proposals so that life can become better.”

Merabishvili showed up for questioning together with his lawyer Mamuka Chabashvili, who said that today’s interrogation was about the passport case.

According to the lawyer, the former interior minister answered all questions. He doesn’t exclude that his client may be once again called in for questioning.

He was first questioned on December 1. Later the ministry published testimonies of all persons involved in this case, including Merabishvili’s. https://dfwatch.net/testimonies-published-in-merabishvili-forged-passport-case-36098

Yesterday, the ministry published information about another official who tried to leave the country with a fake passport.

Later on Friday, the interior ministry released a statement which said that Vano Merabishvili still isn’t cooperating with the investigation, and that his statement contradicts that of others.

“By providing false information he purposefully tries to interrupt the search for objective truth,” the statement says.

The ministry will publish additional material together with testimonies in the next few days.