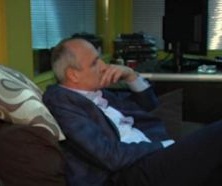 Vano Merabishvili waiting to be questioned at the police December 1, 2012. (IPN.)

TBILISI, DFWatch — Former Interior Minister Vano Merabishvili was Saturday interrogated. He did not comment except saying it’s a pity that the prime minister is using the interior ministry as a tool of repression against the opposition.

The interior ministry accuses Merabishvili of having attempted to leave the country for Yerevan with a fake passport together with a presidential delegation.

The passport bore his picture, but was issued in another person’s name, one Levan Maisuradze. He was allowed to show his own passport, go to Yerevan as planned and come back. The next day he was called in for interrogation.

“My presence at the police was very symbolic. I feel proud when I see Georgian patrol police. It’s a pity Bidzina Ivanishvili uses the interior ministry as a repressive tool against opposition views and the opposition.”

After the interrogation, the ministry released a statement saying that although Merabishvili showed up for the questioning, in fact he didn’t cooperate with the investigation and avoided answering specific question giving general and contradicting answers.

Therefore he will be questioned again together with employees of the presidential administration protocol service.

Later on Saturday, President Saakashvili responded to the development on his official Facebook page, writing that he left for Yerevan November 30 together with the Georgian delegation, which former Prime Minister Vano Merabishvili was part of, participating in every official meeting.

“After this a history made-up by ill fantasy has started, which you society already know,” he writes, adding that the idea that Merabishvili would use a fake passport to go on an official visit is absurd and isn’t even worth a comment.

“I firmly support the principles of democratic government established in Georgia and I’m concerned regarding political persecutions.”

The president expressed hope that those concerned will stop their absurd investigation against Vano Merabishvili.

Zurab Darchiashvili, who chairs the presidential administration’s protocol service, categorically denied that Merabishvili had tried to use a fake passport.

“We have planned many official visits since 2003 with the participation of Vano Merabishvili and I want to assure you that there never has been any case of using a fake or any other type of passport,” he said. “It is surprising that I need to comment on this issue and that there are this type of accusations against him.”

He said the procedure of to passports at the border is very simple and transparent, which excludes the possibility of using a fake passport.

Interior Minister Irakli Gharibashvili on Saturday commented on this issue saying that it is really awkward and shameful that the former Interior and Prime Minister doesn’t admit that his passport was issued in the name of one Levan Maisuradze.

“This fact was observed at Tbilisi airport, observed by a patrol [police] employee and confirmed by an employee of the protocol [service],” he said. “I’m personally ashamed that the former Interior Minister doesn’t admit it. He just lies when he says such a thing never took place.”

The Minister said the investigation will continue and reveal what happened.