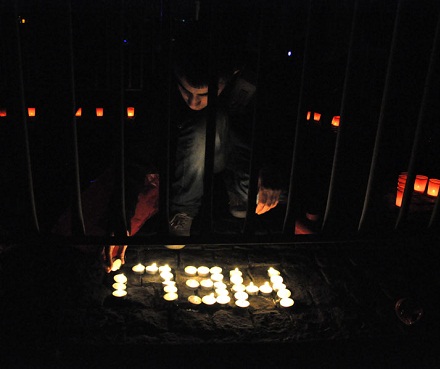 Volunteers and organizers of the event stood and formed of giant ribbon holding candles in red plastic glasses as a sign of solidarity and support to people with HIV/AIDS.

Organizers distributed small pins which say ‘Getting to Zero’, this is the new slogan of the world campaign to fighting AIDS, which means that by 2015 HIV cases should be reduced to a minimum.

Against a background of cheerful music, many people started gathering at the square, while people passing-by joined. Students from almost all universities of Tbilisi were also present, some wearing special t-shirts or red ribbon attached to clothes.

According to the most recent data, the total number of people with HIV/AIDs in Georgia is 11 percent more than it was in 2011 and totals 3 608 cases, but it is not considered an alarming number. 2 643 out of them are men, 965 are women. The largest category of infected are people who use drugs through injection.

Georgia’s Health Ministry has a program for people affected by HIV/AIDS which with the assistance of international organizations offers free medical treatment.