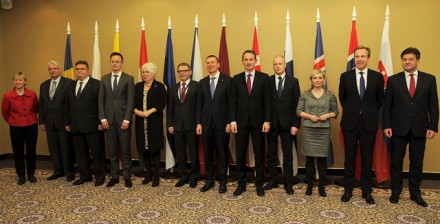 Photo by MFA of Latvia

TBILISI, DFWatch–Foreign ministers of Europe’s northern and eastern countries call on EU member states to go ahead with a plan to allow 90 days visa-free visits for Georgian and Ukrainian citizens.

On 21–22 April, a meeting of foreign ministers of Baltic, Nordic, and Visegrád Group was held in Jūrmala, Latvia.

The meeting was organised by Latvia, which is coordinating the Baltic and Nordic cooperation (NB8) this year, and the Czech Republic, which is holding presidency of the Visegrád Group (V4).

The foreign ministers of Denmark, Finland, Iceland, Norway, Sweden, Estonia, Latvia, Lithuania, the Czech Republic, Hungary, Poland, and Slovakia issue a statement in which they call the European Union to immediately abolish visa regime for Georgia and Ukraine, to abolish them to travel to EU countries without visas.

“Ministers reaffirmed support for the commitments set out in the Joint Declaration of the Riga Summit, while looking up to the next Eastern Partnership Summit in 2017 Ministers confirmed their readiness to continue bolstering the implementation of the Association Agreements with Georgia, Ukraine, and Moldova and emphasised that cooperation with the other partner countries should be developed in conformity with the differentiation principle. In the area of mobility, Ministers noted that visa free travel should be granted to Georgia and Ukraine without delay,” an information on the website of Latvia’s MFA reads.

The NB8+V4 format of foreign ministers’ meetings is a joint initiative by Poland and Sweden that was launched already in 2013. The foreign ministers of the twelve countries previously met in Gdańsk, Poland, in 2013; in Narva, Estonia, in 2014; and in the High Tatras of Slovakia in 2015.

Earlier this month, on 18 April, the minister of foreign affairs of Latvia, Edgars Rinkēvičs called for a visa-free regime for Georgia and Ukraine at the meeting of the EU Foreign Affairs Council in Luxembourg.

Poland’s MFA, Witold Waszczykowski stated earlier this month in his article for Frankfurter Allgemeine Zeitung that in the near future, the EU ‘should offer Ukraine, Moldova and Georgia a membership in the European Union, what will motivate these countries to carry out reforms.’

On 9 March, the European Commission proposed to allow visa-free travel to the Schengen area for Georgian citizens holding a biometric passport given the ‘successful implementation of all the benchmarks’ set in Georgia’s Visa Liberalisation Action Plan.

The final decision whether to abolish visa requirements for Georgian citizens will depend on the European Parliament’s recommendation and subsequent vote at the Council of the European Union, which is a council of representatives of the executive governments of the EU’s 28 member states. Ireland and the UK don’t take part in voting on visa issues, as they opted out from a membership in the Schengen Area. Decisions taken by the Council are valid when supported by at least 55% of the Council’s members who must also represent at least 65% of the EU’s citizens.