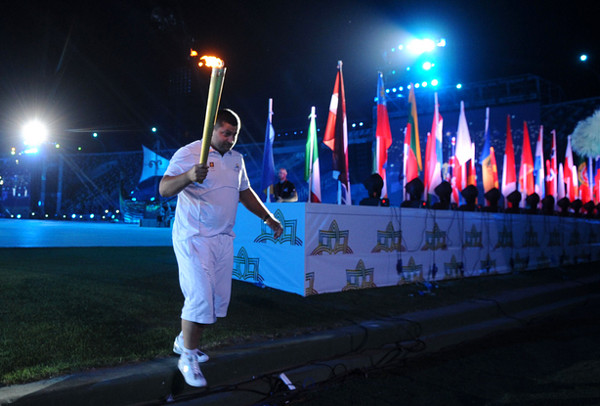 The ceremony lasted about two hours and included Georgian national dances and chants and a ballet portraying the Argonauts, the Greek sailors who according to myth travelled to what is currently called Georgia.

After teams had been introduced carrying the flags of their countries, there were speeches by the president of the European Olympic Committee, the head of the organizing committee and finally the prime minister, who declared the festival opened.

The Olympic fire arrived at the stadium by hot air balloon and was given to former football player Gela Ketashvili. Among those participating in handling the Olympic fire were well-known Georgian athletes, paralympic Temur Dadiani and shooter Nino Salukvadze. Georgia’s first Olympic champion Zurab Zviadauri lit the Olympic torch.

The ceremony was not free of mishaps, as a grand fireworks display caused one of the empty tribunes at the stadium to catch fire and burn. The fire was extinguished by firefighters.

The 13th European Youth Olympic Festival festival lasts from July 27 to August 1. 3,800 participants ranging from 14 to 18 year of age and originating in 50 countries will compete in judo, tennis, gymnastics, cycling, athletics, swimming, volleyball, handball and basketball.