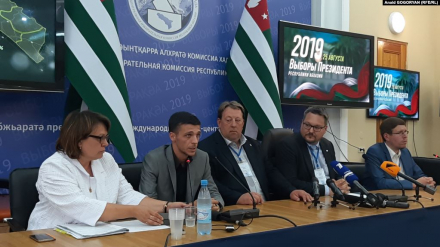 TBILISI, DFWatch–Two politicians from the German far-right AfD were among the foreign observers who were present during Sunday’s election for de facto president of Abkhazia. The election was not recognized by Georgia.

Among the dozens of international observers to the elections were Stefan Keuter, member of the German Bundestag representing the far-right AfD, Gunnar Norbert Lindemann, a member of the Berlin House of Representatives also from AfD, Ján Čarnogurský, a former Prime Minister of Slovakia (1991–1992) who currently is chairman of the Slovak-Russian association, and Austrian Patrick Poppel, a fan of Russian conservative philosopher Alexander Dugin and former secretary general of the Suvorov Institute in Vienna.

The election was also observed by representatives of Russia as well as other self-declared republics, such as Donestk and Lugansk non-recognized republics, Transnistria or Karabakh.

The observers praised the elections as free and democratic, Ekho Kavkaza reports.

On Sunday, Georgia’s Ministry of Foreign Affairs issued a statement saying that elections in occupied Abkhazia violate Georgia’s sovereignty and territorial integrity and contradict the fundamental norms of international law. Georgia does not recognize the elections and regards Abkhazia as a territory occupied by Russia.

Tens of thousands of ethnic Georgians permanently residing in Abkhazia have been stripped of their right to participate in the elections. In Gali district, where Georgians compose almost 98% of the population, none of the candidates carried out any campaigning.