EU spokesman: Georgia will not join the Eurasian Union

EU spokesman: Georgia will not join the Eurasian Union 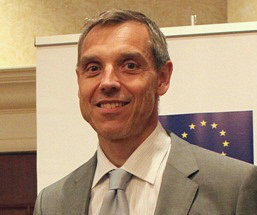 TBILISI, DFWatch–A spokesman for EU’s delegation to Georgia says although Russia has increased its pressure on Eastern Partnership countries, there is no risk that Georgia will join the Eurasian Union, because the Georgian government’s stance is clear.

In 2010, the EU Council of Foreign Ministers granted the European Commission a mandate to hold talks with Armenia, Georgia, and Azerbaijan with the aim of signing bilateral association agreements.

In November, there will be a summit in Vilnius about the Eastern Partnership and according to Keti Khutsishvili, executive director of Open Society Georgia Foundation, Russia has already begun putting pressure on Georgia, Ukraine, Moldova and Armenia.

President of Armenia, Serzh Sargsyan, unexpectedly refused to associate with Europe and decided to join the Eurasian Custom Union (CU); a Russian initiative. Khutsishvili added, that Russia is putting economic pressure on Ukraine, has banned Moldavian wine on the Russian market, and moved so-called administrative borders around South Ossetia; and other types of pressure is expected.

Boris Yaroshevich, Deputy Head of the EU delegation to Georgia, said at a conference named Threats of the Eurasian Union on the way of Georgia’s EU integration, on September 30 that EU was disappointed with Armenia’s withdrawal but it won’t affect Georgia, because Russia and Armenia used to be partners before too and Georgia is against joining the Eurasian Union.

“Membership of Eurasian Customs Union and DCFTA (Deep and Comprehensive Free Trade Area) are absolutely incompatible and Georgia have to chose which one to join (…) I don’t think that there is a threat that Georgia will join CU because the government’s position is clear,” Yaroshevich said.

Tamar Beruchashvili, Deputy Minister of Foreign Affairs, said Georgia is a European country, that is Georgian people’s choice and like previous government, the new government’s priority is to become a member of the EU.

Nino Evgenidze, Executive Director of Economic Policy Research, spoke about both trade unions requirements and their possible affects on Georgia. A membership in the CU includes partnership in military issues, common educational and banking space, one currency, the Russian ruble, and this will lead to reduced competition, low quality, increased prices and Georgia’s dwindling financial independence, while DCFTA gives Georgia the opportunity to bring its products on the European Union’s market and 12% export and 7.5% import growth is expected.

At the end of the conference Eastern Partnership Civil Society Forum, an umbrella organization called Georgian National Platform presented a statement signed by 54 organizations which condemns Russia’s pressure against Georgia’s partnership with Europe and asks Russia to respect the sovereign decisions of other countries.