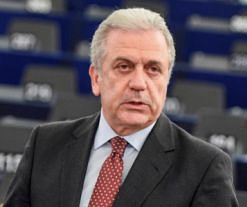 TBILISI, DFWatch–A member of the European Unions executive branch denies that there is any connection between a proposal to host refugee centers in Georgia and the recent decision to allow visa-free travel to the Schengen area for Georgian passport holders.

Large Russian media outlets have claimed that when Georgia was granted visa-free travel to the EU, it also accepted hosting centers for holding recent rejected refugees for the EU.

A spokesperson for EU Migration Commissioner Dimitris Avramopoulos told Voice of America’s Georgian service that visa waiver system for Georgia was based solely on an action plan presented to and accepted by the Georgian government in 2013. The plan contains no mention of refugee centers.

“The Commission has been monitoring progress made by the Georgian authorities since the visa liberalization dialogue was launched and concluded in December 2015, that all benchmarks under this Action plan were met,” reads a written comment by the EU official’s spokesperson.

“The fulfillment of the criteria in the Action Plan, and these criteria only, is the basis on which the Commission proposed to grant visa free travel to Georgian citizens for short stays.”

The confusion was caused by an interview with Austria’s Foreign Minister Sebastian Kurz published in the German newspaper Bild, which stated that the EU needs refugee centers outside its external borders and suggested Georgia, Egypt and Balkan states as possible locations for such centers.

Georgian officials firmly rejected the idea of hosting such centers.