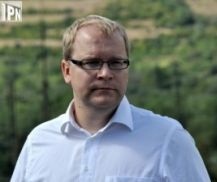 TBILISI DFWatch – The Foreign Affairs Minister of Estonia says every political party in Georgia should recognize the results of the upcoming election as an expression of the will of the people.

He met with his Georgian colleague and after the meeting said that each political candidate and force has an opportunity to participate in the election process.

He expressed hope that the upcoming election will be conducted in a democratic and transparent environment.

Urmas Paet says every citizens should vote on October 1 and make his or her own choice, which should be based on what is good for Georgia and its future.