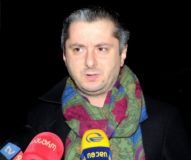 Head of Rustavi 2 TV Nika Gvaramia claims he is under surveillance. (Interpressnews.)

TBILISI, DFWatch–A Georgian TV company accuses the government of wiretapping and spying on its management and journalists.

The accusations were put forth on Tuesday by Nika Gvaramia, director of Rustavi 2, the last major TV channel that remains faithful to former President Saakashvili.

At the beginning of his briefing, Gvaramia apologized for participating in developing the practice of leaking illegal footage. He also said that though this was legal, he acted irresponsibly, because through his actions laid the basis for a bad trend.

Although the Saakashvili government denied the existence of a trend of illegal wiretapping, after the change of government there was discovered thousands of files with illegally recorded video and audio material.

The recordings were destroyed after non-governmental and international organizations demanded it, but there is widespread suspicion that wiretapping is continuing. NGOs are asking for legislative changes to prevent this.

Because of this, the prime minister a few days ago accused the NGOs of participating in activities undermining the country.

On Tuesday, Gvaramia met NGOs and gave them material that he claims was given to him by a current employee of the Interior Ministry, allegedly showing that himself and Rustavi 2 anchor Nino Shubladze are being secretly monitored.

“Though a lot of promises that there would be a changes in this field, audio-visual spying over the TV company is going on. Several days ago, video of how Nino Shubladze and I are wiretapped was secretly provided from the Interior Ministry. It includes two files. Mine-15 minutes and Shubladze’s 1 hour long video material,” Gvaramia said.

He added that according to his source, there exists several other files about other Rustavi 2 employees.

“We tried to find spying equipment on our own, but we only found special holes, not video cameras,” said Gvaramia, who claims that the footage was made in June 2013.

Aside from being fiercely pro-Saakashvili, Rustavi 2 is also known for putting out false news stories, especially stories that seem aimed at destabilizing Georgia’s relations with its breakaway regions. It was criticized for this in a report by the United Nations months before the 2008 war.

The channel’s low credibility notwithstanding, the campaigners who are trying to rein in illegal surveillance, the ombudsman and some politicians said in a statement that the case should be investigated.

“An investigation is necessary to make conclusions. I’m afraid that there exists garbage somewhere and it will be opened as a Pandora’s Box that will cause a big explosion in society. It’s a fact that the footage exists and we haven’t been able to adopt new legislative norms to control it yet,” said Lasha Tughushi, head of the National Platform, a union of NGOs and one of the organizers of the draft law to reign in illegal surveillance.

The prime minister has not yet commented.

The Prosecutor’s Office has created a special investigative commission to study the case and called on Rustavi 2 to cooperate.

“Do you believe it? I think there are surveillance cameras here too,” he told a Rustavi 2 journalist.

Gharibashvili said a few days ago that the government is not conducting illegal surveillance.