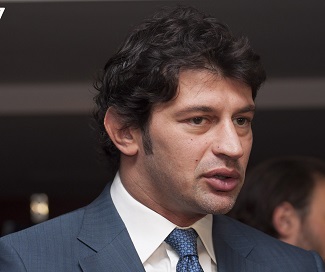 TBILISI, DFWatch–The Georgian Energy Minister Friday lashed out against the public defender and accused him of lying about not wanting to meet the population in a mountain valley poised to be flooded by a giantic hydro power dam.

The Khudoni hydro power project will flood the village Khaishi and several other settlements in the Svaneti region which has a particularly rich cultural landscape. Over a thousand people may be forced to abandon their homes and see their graveyard covered by water.

As affected people and environmentalists have been protesting in a last minute bid to stop the plans, the government has tried to convince the population that the dam is worth the losses it will inflict locally.

Last week, Public Defender Ucha Nanuashvili met with population in Khaishi, a village which will be flooded if the gigantic Khudoni dam is constructed. They told him their main demand is to meet with Energy Ministry Kakhi Kaladze and the company Transelektrika, which is behind the project. They also asked to postpone the meeting which was planned between the population in the Svaneti region, where the project is located, and government officials, as well as the company. They said they needed more time to prepare.

After meeting the people in Khaishi, the ombudsman said it would have been better to hold the meeting later than February 6, because there was too little time to prepare.

Later, he said that he contacted the Energy Ministry and the investor company and asked them to start a dialogue, but received a rejection from both of them.

But the Energy Ministry responded that they have not been contacted by the Ombudsman. Kaladze, who is also Vice Prime Minister, said he had never refused to meet the villagers. His ministry wrote in a statement that they always hold meetings with all interested parties related to different projects.

In a talk show on Maestro TV on February 5, Kaladze accused Nanuashvili of lying.

“We want to remind the public defender as an official person that it is unacceptable to make an unprepared and groundless statement about such a project of social importance as the Khudoni dam is,” the statement of the Energy Ministry reads. It continued saying that the ministry had not received an official appeal from the Ombudsman’s office.

But Nanuashvili responded that he was offended by this statement by Kaladze. He called on the minister to get in contact with his own press office before making statements about unchecked information.

“I had a sense that he didn’t read this information by the public defender, because otherwise he wouldn’t have made such an offending statement,” Nanuashvili said.

Then the Energy Ministry responded back that the ombudsman is trying to discredit the energy minister. It writes that the ministry is always ready for dialogue about any topic and has never refused to meet Khaishi villagers.

The ministry repeated that is has received no official request from the ombudsman. The ministry further writes that it is ready to meet with the ombudsman for consultations and assures that the ministry didn’t violate any human rights.

“When it comes to how reasonable it is to implement the Khudoni project and how necessary to hold discussion and make decisions, this goes beyond the authority and competence of the ombudsman,” the ministry writes.

In the evening of February 5, Nanuashvili said that the meeting in Khaishi was postponed, as asked for by the villagers. The new date is not yet known.